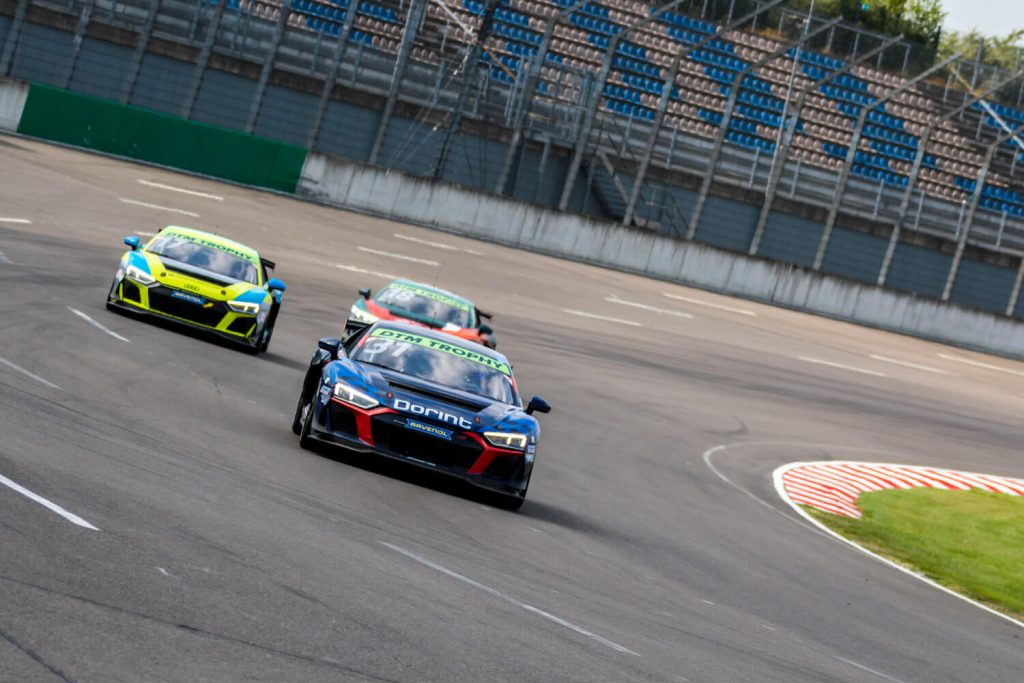 Disappointing race weekend for Heide-Motorsport at the Lausitzring

Heide-Motorsport travelled to the second race weekend of the DTM Trophy at the Lausitzring with high expectations. On the 4.562-kilometer track, which for the first time in this series led further into the 300-meter steep turn at the end of the home straight, three Audi R8 LMS cars of the team from Witten were again on the grid.

After a disappointing Balance of Performance at the season opener at Monza (Italy), the free practice sessions on Friday also indicated that the weekend would be difficult for the Audi team. The driver trio – Sophie Hofmann (DE), Lucas Mauron (CH) and Jörg Viebahn (DE) – were able to familiarize themselves with the new track layout and take away important findings for the chassis set-up.

It was the Swiss Lucas Mauron who secured the best starting position for the Auditeam with eighth place. Unfortunately, his race came to an abrupt end in the seventh minute. After a collision with a BMW, he spun into the wall at the start-finish straight, where he was hit in the passenger side and pushed along the wall. Thanks to the strong effort of the mechanics, who had repaired the Audi until the early hours of the morning, the start on Sunday was possible. Starting from seventh place in the 30-minute scoring run, he drove up to fifth place, but again finished the race outside the points after a collision.

Sophie Hofmann, who is contesting her first season in the DTM Trophy, showed a strong improvement in performance over the course of the race weekend at her home race, as she did at the season opener. Like the other Audi drivers, she struggled with the vehicle classification, which does not allow the brand from Ingolstadt to be competitive, and finished 14th in Saturday‘s race and 16th in Sunday‘s race after 30 minutes of racing.

The third car was again driven by Jörg Viebahn. The 57-year-old, who had a wealth of experience in GT4, experienced a difficult weekend in Brandenburg. Several collisions and slips prevented results within the points.

Rafael Kliem (Team Principal): The course of the season so far in the DTM Trophy is disappointing. Our drivers go to the limit every lap, our mechanics work day and night to get the cars back on track and still we leave the Lausitzring with zero points. It‘s a shame that the series still hasn‘t been able to achieve a performance-oriented Balance of Performance that guarantees equal opportunities for all teams and manufacturers.

Sophie Hofmann (Driver #17): I was able to learn a few things at the Lausitzring. The race weekend was very tough for our team, but we had the opportunity to drive a steep corner for once. The guys did a great job and it was awesome to finally be able to drive in front of spectators again!

Lucas Mauron (Driver #33): I‘ve never had such a challenging weekend at the track. I was at the absolute limit every lap in order to be able to be somewhat competitive with our Audi. With this hard and reckless driving style within the series, it now has nothing to do with racing for me. A thousand thanks again to my team, which worked until Sunday morning and made it possible for me to compete at all.

Jörg Viebahn (Driver #31): It was a weekend to forget. After disappointing qualifying sessions, I always managed to work my way up to the midfield, only to be pushed back again by various incidents. Without the commitment of the mechanics I probably wouldn‘t have started.