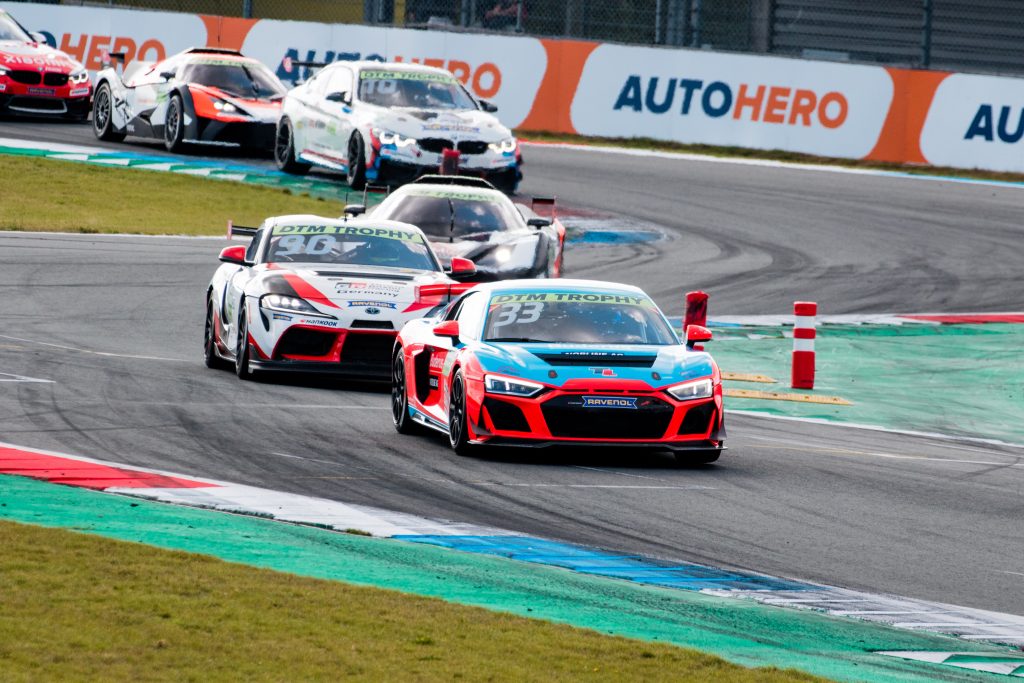 Heide-Motorsport traveled to the “Cathedral of Speed” – the TT Circuit of Assen – with high expectations. After using the practice sessions on Friday for setup adjustments, on Saturday morning came the surprise: Lucas Mauron (CH) took pole position in the grid of 19 cars. He did not let this position be taken away from him over the 30 minutes of racing and crossed the finish line with a lead of over six seconds. The first overall victory for Heide-Motorsport in the DTM Trophy and, together with the three points for the fastest lap in qualifying, the full haul of 28 points for the championship. On Sunday, the 23-year-old Swiss again burned the fastest lap into the asphalt of the world-famous motorcycle track. In the race and with 25kg success weight, it was enough for second place overall and another podium finish for the Audi driver.

Sophie Hofmann (DE) and Sebastian Kornely (DE) again showed a further improvement in performance.
Sebastian Kornely, who competes in the “LIQUI MOLY” Audi, improved his lap times by more than four seconds over the course of the weekend and is gaining more and more confidence in the GT car. Sophie Hofmann also delivered thrilling duels with her competitors in the DTM junior series in both races and was again able to take away knowledge for the last two race weekends.

Rafael Kliem (Team Principal): We are very pleased with the way the weekend went! Our team and our drivers were able to show what the Audi R8 is capable of and with two pole positions and two podium finishes we are also in a good position in the team standings. There are now two race weekends left at Hockenheim and the Norisring, so we’ll continue to give everything to finish our season on a high!

Sophie Hofmann (Driver #17): I was pretty happy with our pace this weekend, the Audi felt good in the races. Unfortunately, I was hit by a competitor in the race, which prevented my chance for a better result. Nevertheless, I’m very proud of the team and it was great to see so many fans at the track and in the paddock!

Sebastian Kornely (Driver #31): The track was new for me and different from the Red Bull Ring in terms of track profile, so it took me some time to get to grips with the Audi here. Overall, though, I’m getting more and more comfortable with the car and was able to improve my lap times by four seconds over the course of the weekend – I want to build on that at Hockenheim! It was great to race in front of 35,000 spectators and to further promote our fundraising campaign. Congratulations to Lucas and the whole team on the overall victory!

Lucas Mauron (Driver #33): After the practice sessions, we didn’t expect to be so fast on Saturday. The first race went mega and I was able to control the race, even during the start and the re-start. Finally, we claimed our first win for the team and me this season! The second race was difficult with the 25kg success weights, but we can still be happy with the second place. Thanks to all the team members, who did a great job this weekend, and the fans for your support!