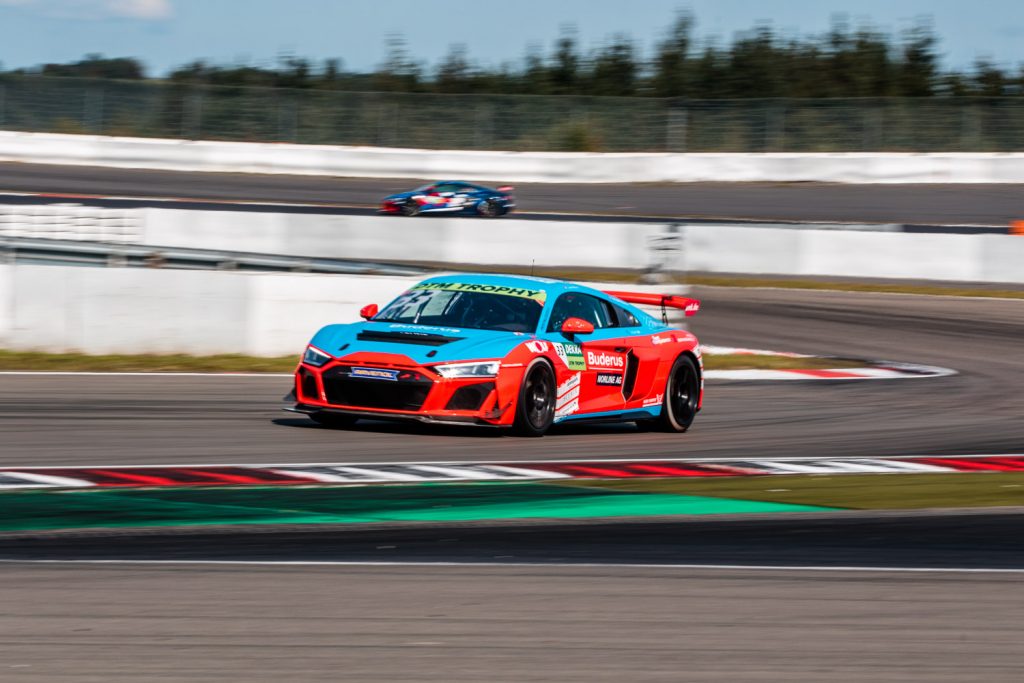 First podium finish for Heide-Motorsport: Successful weekend at the Nürburgring

After recent disappointing races in the DTM Trophy, Heide-Motorsport traveled to the Eifel with three Audi R8 LMS GT cars to tackle the third race weekend of the DTM Trophy.

The qualifying session on Saturday morning already got off to a pleasing start. Lucas Mauron (CH) placed his Audi on the second row of the grid and started the race from position three. At the start, Lucas Mauron initially fell back a little, but then put up a tough fight over the course of the entire 30 minutes of racing, which he finally decided in his favor and crossed the finish line in fifth place. In the second race on Sunday afternoon, the 23-year-old had a great start and moved from sixth on the grid to the front of the field. Despite a 5-second time penalty due to an incident, he managed to build up enough of a lead over the competition to finish second overall. However, as the winning team only makes a guest appearance in the junior series, full points for the win went to the Swiss driver.

There was a debut for Miklas Born (CH). The 19-year-old, who is otherwise at home in endurance racing, competed in a sprint race for the first time in his still young career. Informative practice sessions and a somewhat difficult Saturday race already put him within striking distance of the top on Sunday. After an exciting 30 minutes of racing on the 3.629km sprint version of the Nürburgring GP circuit and some thrilling duels, he rewarded himself with 12th overall and a point in the fiercely contested championship.

The third car was again driven by Sophie Hofmann (DE). The driver from Waldenburg gained more and more confidence in her Audi R8 LMS GT and continuously increased her times over the course of the weekend.

Rafael Kliem (Team Principal): Finally, our work paid off! After a bumpy beginning to our debut season, we proved the potential of the car and our drivers at the Nürburgring. Lucas got off to a super start – we can be more than satisfied with our first podium finish and 37 points for the team standings. Miklas and Sophie also did a good job and gained a lot of experience.

Sophie Hofmann (driver #17): On Friday I had a rather difficult start to the weekend in the mixed conditions in the Eifel. The field tightened up once again, but I’m still very happy to have improved further. Unfortunately, I had to fight with a few physical limitations again, which I hope will be resolved by the next appearance at the Red Bull Ring. Congratulations to the whole team and to Lucas for the first podium in the 2021 DTM Trophy!

Miklas Born (driver #31): The weekend in the DTM Trophy was fun! In the second qualifying session I was already within striking distance of the front runners, but for the race pace I unfortunately lacked experience with the car and the Hankook tires. My motto was to bring the Audi R8 across the finish line in one piece – and I’m obviously happy that I scored a point in the process. Thanks to Heide-Motorsport for the spontaneous opportunity to make this guest start!

Lucas Mauron (driver #33): I’m relieved that we finally scored our first podium finish of the 2021 season after all the bad luck. We were directly competitive at the Nürburgring and after minor adjustments to the setup, the car was great to drive on Sunday! Especially in the second race I was able to set a strong pace and show what the Audi is capable of. We’re definitely going to Austria with a tailwind and want to build on this result.